This is what Conrado Xalabarder, one of the most important film music critics in Spain, wrote about me…

Nominated at the 5th Jerry Goldsmith Awards in the category for best Documentary with “Fano dei Cesari”, the young italian composer Kristian Sensini (in the picture, with Michael Giacchino) came to Úbeda’s 6th International Film Music Festival and had the chance to present – during the Audiovisual Composition workshop – other works of his, which prove that he’s a very emotional composer, but also cerebral, with sophisticated and refined musical formulas. He apparently is a serious person, but he’s actually very kind-hearted and friendly. As it couldn’t be otherwise, he made friends with several colleagues and he made the most of each and every activity in the Festival, an event that, year after year, shows how much it takes to discover new talents.

We’re going to take a close eye on him, for sure. 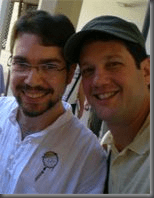