Check this interview on http://trailermusicvibe.blogspot.it/2012/08/kristian-sensini-interview.html?spref=tw

Meet Kristian Sensini – another emerging composer from the cupboards of the production music industry. He was thrilled to interview with Trailer Music Vibe and I am happy present to you now the following interview. Be sure to follow Sensini on Facebook.

How did you become a composer?
Since I was really young, I have always enjoyed creating music instead of playing music of other people. I’ve grown up with the greatest movies of the eighties and, thanks to my father, I got to know the Italian Movies from the sixties and the seventies. This of course has represented a big influence on my music.
I’ve also played in several rock bands and jazz combos (I graduated in Jazz at Pesaro Conservatory in Italy) and people always told me that my instrumental music was really evocative, “like a soundtrack”. This drove me to try and work on my first project, and now to work as a professional composer for films, tv and videogames.

What inspires you?
Everything really; obviously I listen to a lot of music (not only soundtracks from the Golden Age of Hollywood, but Rock, Jazz and Classical Music). I usually get inspired by good stories, movies, books and even everyday life with its dark and light moments. I’m not one of those musicians that derives inspiration from just sitting in their studios: I think that the time I spend out of the studio (when I take a walk for example) is as important as the time I spend in it, playing piano and experimenting on melody and harmony.

What was your defining moment?
As a composer, I think I’m not a “defined artist”; I mean that I discover new things every day, develop new ideas, try new harmonic/melodic/timbric solutions. I can say that I have at least a defining moment… per week, when I discover something in my music that I particularly like and I’m usually a bit of a critic in my work. Talking about my composer career, I think there have been a couple of “defining” moments: the first full movie scored for an American director (Butterfly Rising by Tanya Wright) and the first nomination I’ve received in 2010 at the Jerry Goldsmith Film Music Awards, in Spain. I’m a composer who lives in a really small town in Italy and it’s sort of difficult to have international visibility, not working in a big city, or in the USA for example. So these international acknowledgments had truly defined my career (I currently have an agent in the USA who helps me find job opportunities outside Italy).

What can you tell TMV about upcoming projects?
I’ve just released on Itunes my latest soundtrack, “Hyde’s Secret Nightmare”, from the movie directed by Domiziano Cristopharo.
The soundtrack will be available on CD in September for Kronos Records. They have released soundtracks composed by some of the best Italian Film Composers, such as Piero Piccioni, Piero Umiliani & Francesco de Masi .
In this period I’m reading a couple of scripts (for a horror movie and a documentary), but I can’t tell you anything more about these projects…
In addition, I have just started a group of composers to realize compositions for music libraries and trailer houses http://www.soundalike.net/ (we had some placements for Discovery Channel , History Channel and Mediaset – the biggest tv network in Italy). It’s a lot of fun, because you have more freedom and I may have the chance to make an action cue one day and a cool comedy music cue the next one. I’m lucky enough to work with amazing professionals here in Italy that are helping me create a fantastic catalogue (which you can listen to online on the website).
For all the news about my works I’d like to invite you to visit me on my official website , my Twitter & IMDB pages.

Comments?
Thank you so much for the interview. I’m a fan of your website and I always discover amazing new music there! 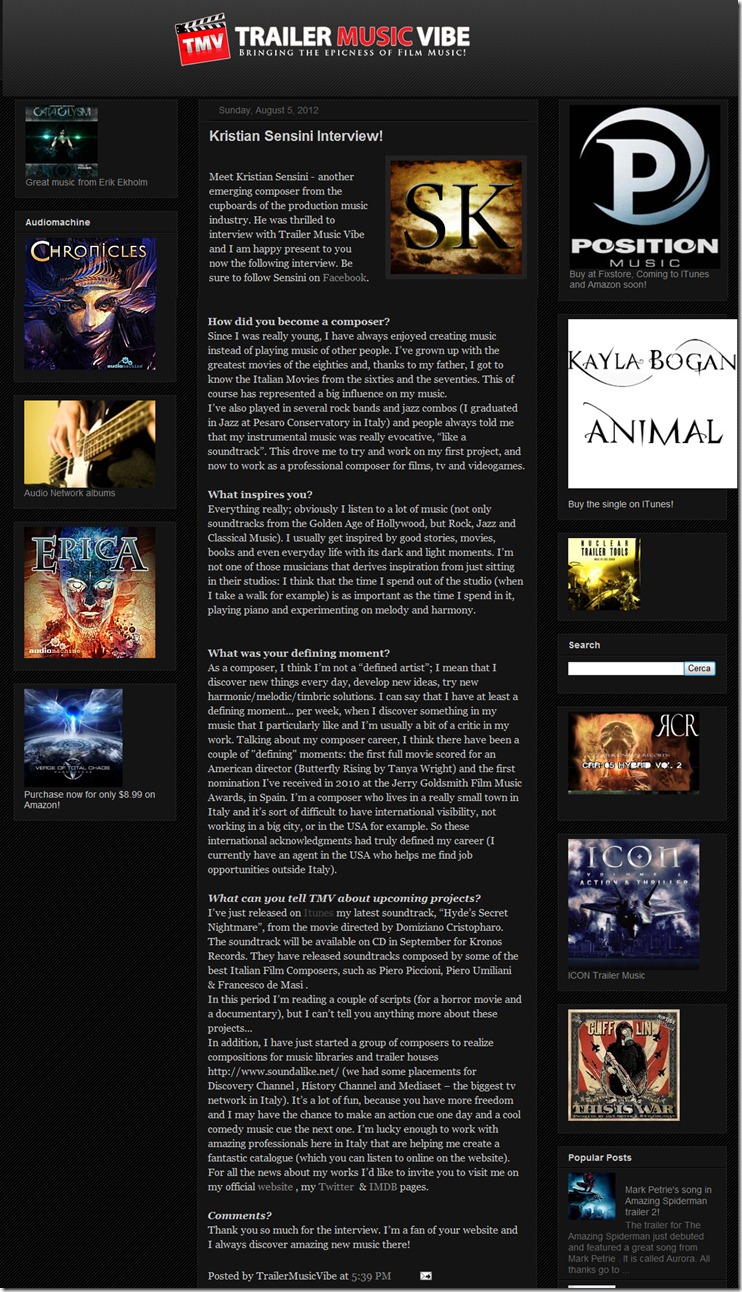