and as limited edition on
http://www.kronosrecords.com/catalogue.html

In Taxi Driver (76) composer Bernard Herrmann wrote one of the referential scores in the duality Jekyll/Hyde, which is exactly how he saw and applied the music in the character of Travis Bickle, in the form of a constant struggle theme/countertheme that set out who was dominating the character´s mind. In other films, and directly out from Stevenson´s story, the music tended to be more environmental than psychological.

This soundtrack of the young Italian composer Kristian Sensini is a great surprise in an environment as codified as the current in film music. He does not use the game of dueling theme/countertheme (among other reasons because it worked very well at its time but now it might be too basic, not being he a genius as Bernard Herrmann), but Sensini neither eludes to take to the musical field the war between two warring personalities of one only person. He does this first establishing the environment in which it will be developed the battle: the aged and wistful psychedelia of the glorious years of Giallo, among other styles that he applies for the sorrounding. On respect to the duel, he does not face one theme to another but a group of themes against others. Thus, his music dark, sinister, also perverse serves to expose the evil and the danger in it, while the human side and not demonic is exposed with a music that is fragile and distressed, comparatively weaker. He does it with a calculated imbalance without reference themes that may serve to help the spectators to rationalize the character behaviors and, conversely, creating a very controlled and ordered chaos. Each of his themes is laboriously worked and altogether makes an exemplary soundtrack. 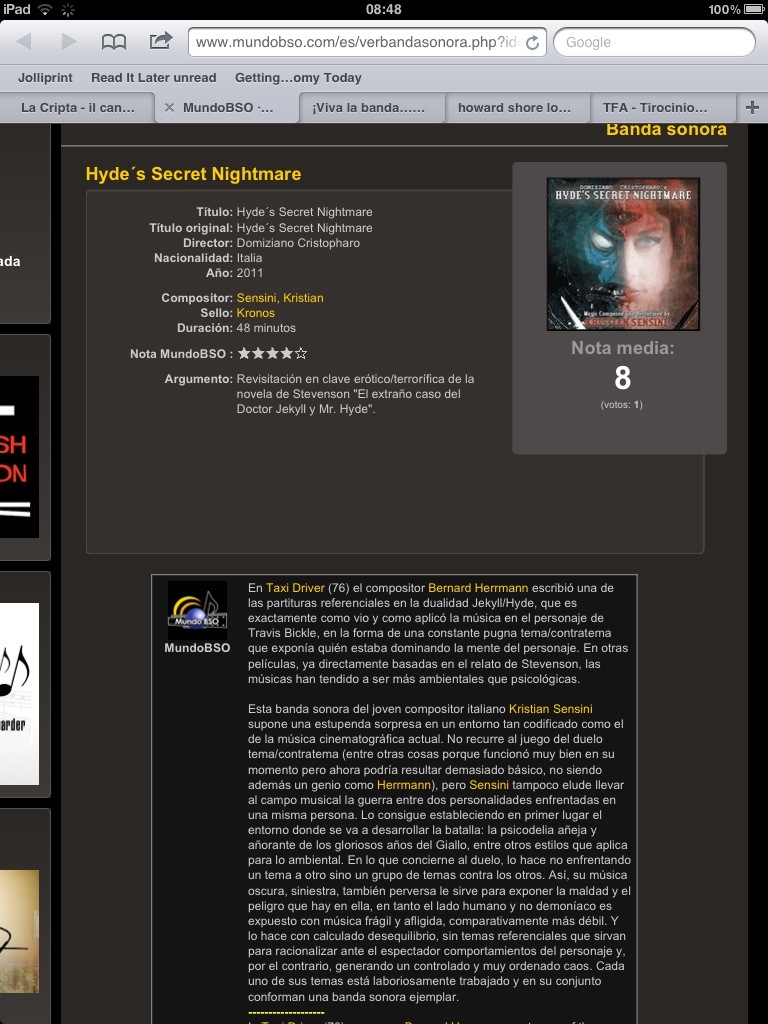