Kristian Sensini is a piano and flute player with a background in classical and jazz music. He has composed scores for numerous film and television productions and has been nominated in   successive years at the Jerry Goldsmith International Film Music Awards. He studied for his Degree in Jazz at Pesaro Conservatory, Italy and follows Master classes and Workshop of Composition with: Ennio Morricone, Michael Giacchino, Nathan Barr, Dave Grusin and Christopher Lennertz. He has a natural ability to feel and interpret film, being able to enhance a project with his talent and creative ability. Kristian’s credits include: 7 GIORNI DELLA FINE DEL MONDO, HYDE’S SECRET NIGHTMARE, BRIGHTSIDE, WARSPEAR, P.O.E. POETRY OF EERIE.

John Mansell: Where and when were you born?
Kristian Sensini: I was born in Loreto, a city in the center of Italy, on November 18th, 1976.

John Mansell: What are you earliest memories of music of any kind?
Kristian Sensini: It’s hard to tell, my memories are mixed with the memory of the stories my parents told me. They say I was attracted to music since I was just some months old, and even if my parents weren’t musicians our house used to be full of music every day. I have some videos of myself pretending to play an old organ, and singing and dancing too. I had, and still have, a collection of vinyl records (mostly cartoon themes from the 70s and the 80s) and I remember I would use them to play music but also as Frisbees! I can remember my first, really boring, piano lessons when I was six or seven years old and the day my father bought me a grand piano, which is now in my studio.

John Mansell: Was writing music for film something that you always wanted to do?
Kristian Sensini: Writing music is something I’ve always done, and I’ve been a movie lover since I was kid, thanks to my father who showed me many great movies on vhs (well we had a Betamax…) and brought me to the cinema at least once a week. So, I think writing music for movies simply unites two of my passions: music and movies.

John Mansell: Are you from a family background that involves music at all?
Kristian Sensini: As I said, my parents never studied music and they can’t play any instrument, but they are very good in drawing, sculpting and painting, things I really can’t do. My grandfather was an amateur accordionist, or to be more precise, a fisarmonica player: I still have his fisarmonica, an amazing instrument dating back to the early 1900s. Unluckily, he died before I was born so I never met him: I hope some of his “music genes” have been passed down to me.

John Mansell: What musical education did you receive?
Kristian Sensini: I started studying piano at six, seven years old, but I got bored after a month or two. Then I continued as an autodidact, mostly, and I occasionally had some piano lessons but not for long periods of time. Growing up, I started studying the flute too and approaching the jazz language. I studied Musicology at the University of Bologna, Jazz at Berklee Summer Courses (on that occasion, I also won a scholarship) and I got my Jazz Degree at the Conservatory of Pesaro where I studied classical flute as well. Most recently, I’ve attended master-classes and workshops with great composers such as Morricone, Giacchino, Grusin, Bource and many others.

John Mansell: A number of your scores are for Horror films, is this a genre you are particularly attracted to or is this something that has just occurred because maybe producers associate you with horror pictures because your music has been successful within them?
Kristian Sensini: Well… both I think! I mean, I’ve been a huge horror fan since I was about 11 years old, I think I have seen nearly every horror movie released in the 80s and in the 90s. Even now I don’t miss a movie of that genre. I’m a fan of the Universal Monsters movies, I love the Nightmare series and the Friday the 13th saga, I’ve got a crush on Troma Flicks. Some of my favourite writers are Poe, Lovecaft and Stephen King. So I’m a kind of Horror Fan-boy, I’m really attracted to horror movies and I like to score them. It’s good to be associated with that genre and to receive such offers from producers and directors, because horror movies give you a lot of freedom when it comes to music: you can experiment strange harmonies, odd orchestrations and be really melodic at same time. Soundtracks for this kind of movies are not so popular among the critics; in fact the only horror score to win an Academy Award was the one for The Omen, by the amazing Jerry Goldsmith. People think that they don’t deserve much attention just because they are… commercial horror movies. To be honest, I think that writing a good score in that genre is really difficult; you play with people expectations, with their feelings and primordial fears. You often anticipate or show what can’t yet be seen on screen, it’s like being a magician who plays tricks to the audience to make them enjoy the show.

John Mansell: What composers either from the world of film or outside of it would you say have either influenced you or served as an inspiration to you and the way that you approach scoring a film ?
Kristian Sensini: I have a huge list but the following ones are particularly important to me: Hermann, Williams, Goldsmith, Shore, Morricone, Trovajoli, Rota and mo
st recently Giacchino, Marianelli and Greenwood. Outside the film field, the most influential composers are Mozart, Ravel, Dvorak, Debussy, Stravinskij and Bartòk. I’m also influenced by great jazz composers such as Mingus and Ellington and great rock bands such as Queen, Beatles and Pink Floyd. 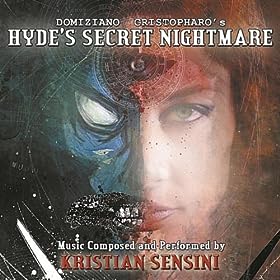 John Mansell: HYDE’S SECRET NIGHTMARE has just been issued onto compact disc, this is on Kronos records, the score is certainly an atmospheric one and well suited to the films subject matter. Did you have any involvement in the production of the CD, by this I mean were you responsible for selecting what music would go onto the disc?
Kristian Sensini: I just did it all my self, say, composed, performed and recorded. I’m responsible of part of the graphics as well. I decided to include every single note I had played for this movie, so there isn’t a real selection. I like the idea that if someone buys a record, this record should be of the maximum length possible, so I’ve also inserted some bonus materials and previously unreleased tracks.

John Mansell: What size orchestra did you utilize on HYDE’S SECRET NIGHTMARE and where was the score recorded?
Kristian Sensini: The orchestra you listen to on the record is all digital samples, except for the flute, which is played by me. The budget didn’t allow the use of a real orchestra, so I used a variety of ensembles, big orchestras in some cues (overdubs and overdubs of orchestral sections that make a huge sound), prog-rock ensembles (in the style of horror soundtracks from the 70s), small chamber ensembles, jazz combos and so on. As I said, horror scores give a lot of freedom to a composer. Being all digital, I’ve recorded everything in my own home studio.

John Mansell: Do you orchestrate all of your own music and do you ever perform on any of your scores?
Kristian Sensini: I orchestrate every single cue and I perform, through a keyboard, or on my flute, every single note you hear in the soundtrack. This is a great thing, the good part of not working with a real orchestra. The bad part is that there are no real instruments… I’d like to work on movies where a real, even small, orchestra is hired. Unluckily, nowadays this happens very rarely, as directors and producers think that a good sample orchestra is good enough. And this happens not only with small/medium composers like me…

John Mansell: Do you conduct at all, if so do you conduct all of your film scores or are there times when you have a conductor so that you can monitor things from the control booth?
Kristian Sensini: I especially like to conduct choirs or jazz groups, but this isn’t usually the case in my soundtracks.

John Mansell: When writing a score how many times would you normally view the film or project before you began to get fixed ideas about what music you will compose or how much music etc. will be needed?
Kristian Sensini: I try to be… “Pure” and trust my first impressions: I usually watch the movie cue by cue and start writing some ideas or improvising something after the very first “view”. Having studied and practised improvisation, I’ve learnt to trust my instinct. Sometimes my first ideas are good enough, some other times they aren’t, so I go back on my steps and try something different.

John Mansell: Do you work out your musical ideas on the keyboard before you commit them to the score or do you utilize computer etc to do this?
Kristian Sensini: It depends on if I’m in a rush or not… sometimes directors ask you a full orchestrated digital mockup of a specific cue to be ready in a day or even in a few hours. In such cases composition, orchestration and recording are the same process. When I have time I prefer to sit on my grand piano and compose with paper, pencil… and eraser…

John Mansell: What do you feel is the purpose of music within film?
Kristian Sensini: To help the narration of the story, to unveil facts, places, feelings and characters that are not visible as far as “images” are concerned. It’s a great way to save time when you tell a story: with just a couple of notes or the use of a particular timbre you can put a scene in a specific time in the past or future, on in a specific land or country. It’s pure magic!

John Mansell: Do you buy Compact Discs at all, if so what music features prominently within your collection, is it a mixture of all types of music?
Kristian Sensini: I love to buy compact discs and vinyl; I get nostalgic with those… I have a bit of everything, lots of jazz recordings, soundtracks and classical music, early medieval music and rock.

John Mansell: What are you working on at the moment?
Kristian Sensini: I’ve just written some string quartets for a commercial and I’m recording an album of instrumental music, mostly for piano, with a cinematic taste. I’m dealing with a couple of projects that will start really soon, but I can’t talk about them until they’re confirmed… I’m a little bit superstitious on this! 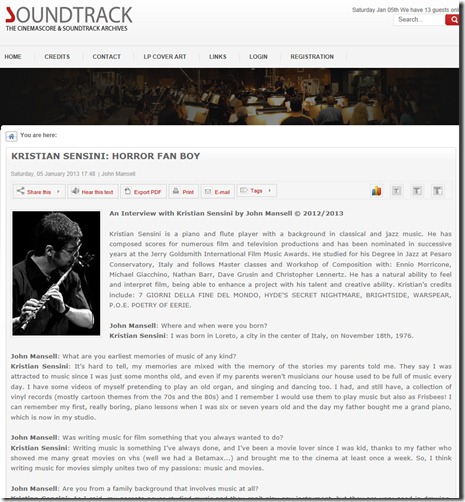