Amazing review, really proud of it !

You can buy the soundtrack at Kronos Records Website

or on Itunes in Digital Format

Kronos Records  has released a CD of Kristian Sensini’s eloquent orchestral score for this “granguignolesque and erotic” horror reinterpretation of the Dr. Jekyll and Mr. Hyde saga.  The film is from Italian director Domiziano Cristopharo, who first began to recover the tradition of erotic horror in his 2009 film, HOUSE OF FLESH MANNEQUINS, which was also his first collaboration with composer Sensini.  The two worked again on 2010’s THE MUSEUM OF WONDERS; Cristopharo described their collaboration on HYDE’S SECRET NIGHTMARE as their best collaboration to date.   “HYDE’S SECRET NIGHTMARE was something complex to make music for, but I wrote it out of instinct, thanks to the evocative power of the images,” wrote Sensini in a composer’s note in the album booklet.  “From my part, it’s a personal tribute to the many international Masters (Goldsmith, Herrmann, North) and Italian composers (Morricone, Simonetti, Frizzi) who made this genre a great one.”  Sensini created the score in his own studio.  “I didn’t try to imitate a real orchestra through technology,” he said.  “On the contrast, I wanted to use the digital sound palette I had at my disposal in a creative way, in order to recreate a new sound floating above dream, reality, and nightmare.”  Eschewing specific themes, Sensini chose to use a simple three-note descending melody, which is omnipresent throughout the film in a wide number of very different variations.  The score embraces a kind of dark allure, fitting the director’s mix of seduction and suspense, eroticism and alarm.  Its central 3-note phrase reappears throughout like an unwanted evil spirit, emerging from the shadows to evoke the tendrils of its melody or evoked in a passionate pianistic triad with voice and woodwind, such as the dark sensuality of “Love you Madly,” which grows and erupts into an oppressive siren-song of imminent doom, the glint of sharp teeth reflected in its gathered cacophony and wailing melisma.  The score creeps along this way in a variety of guises, from haunting solo piano pieces (“Truth or Dare,” “Mother”) and spooky mélanges of acoustic piano and synthesized ambiance (“Bad Memories,” “Twinge of Love” which also adds a distant operatic voice, Thereminlike, into the mix), to rocking grooves (“Elektro Dark”) and minimalistic progressions of piano and winds (“Beyond the Mirror”).  “Sad-uction” is a particularly striking track: opening quietly with low, pensive piano notes and reverberating scraped piano strings, the main melody is gently played on acoustic guitar while a quiet flute wafts in the background.  The cue grows in emphasis, progressively rising in power, until its formal structure is shed and the cue becomes a frightening array of fragmented shards of its former design, the piano melody transformed into malicious harpsichord notes, the flute piping aimlessly, the 3-note motif erupting in a viciously thrice-segmented declarative grimace, until all dissolves into a rushing spray of eruptive cymbal.   “Death Lover” is a sensuous cue embraced within a rocking electric bass rhythm, progressing into a sturdier mélange of urgently fingered piano arpeggios, very giallo in style.  It’s quite a captivating score with an interesting mixture of styles, each evoking a kind of gloomy longing in which desire seeks constantly to trump caution and danger lurks with each enticing curve of shadow.  The composer’s sure hand keeps the musical momentum from spiraling out of control, and the progressive textures and enigmatic appeal of the sound design is constantly appealing.  Bonus tracks on the album include Sensini’s quite thrilling developing ambiance for the film’s trailer, and two tracks he wrote for Cristopharo’s segment of the subsequent 2011 anthology film, P.O.E. POETRY OF EERIE. 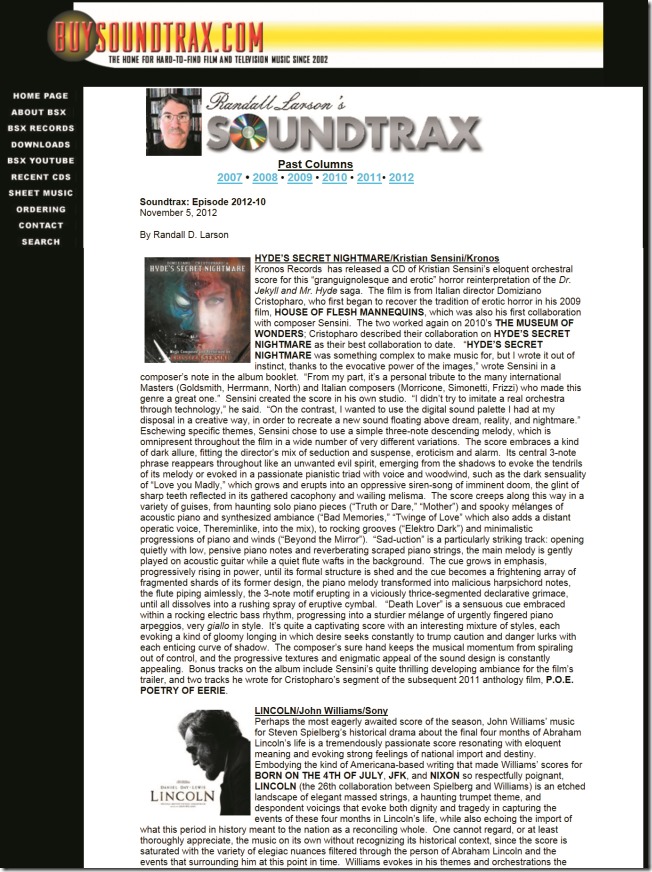