Seventh nomination for Kristian Sensini (Loreto, Italy, 1976), who is also nominated in the Promotional category, and second for Agnese Flagiello.

It’s a song I wrote for a short film dealing with violence against women. The composition was written for the main titles of this really dramatic movie, and the idea was to let the audience leave the theatre with a message of hope. The lyrics follow this idea too: women can fight for freedom and must say no to violence. I wanted to express this sense of rebellion and hope through music, so we’ve worked with the singer Laura Bruno on the way the song had to be performed, cause the risk was to express too much a drama that is simply too clear to be overemphasized with vocals. The song is orchestrated for a small ensemble, mainly piano and cello, just to keep the atmosphere really intimate, and the continuing changing harmony is the expression of the different and changing feelings a woman may have against a violent lover. The melodic intervals of the voice and the total extension of the melody itself are wide, and are used to highlight the desire of freedom of that woman, her determination for a better life without violence. The music and the lyrics have been written in just one day, and this surely adds to a strong and really emotional reaction on this topic. 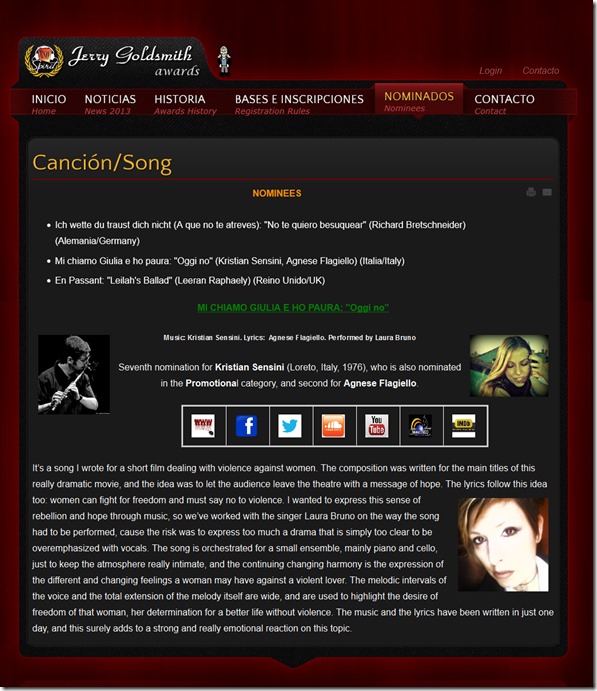 NOMINATION FOR BEST IN PROMOTION

Seventh nomination for Kristian Sensini (Loreto, Italy, 1976), who is also nominated in the Song category.

The idea was to consider this corporate video more like a short movie or a documentary, and to explore through music all the emotions and the feelings I had about it. The video is about the traditional shoemaking (by hand) in a factory of my region (Marche), an area which represents the heart of the Italian footwear industry. To me, the topic was particularly interesting, my great-grandfather was a traditional cobbler, so was my grandfather, and my father still works in the modern footwear industry, so – yes – I’m the first in my family to do a job that doesn’t deal with shoes… I thought it was amazing, in a way or another, to work on a project like this, for a matter of roots and tradition. I chose to write 3 string quartets, to express a more intimate and emotional sound, with a touch of popular/traditional Italian feeling: the warmth of old traditions, the beauty of time that flows gently, the respect for nature and for work. I wanted to express the idea of how pleasing and satisfying the manual labor could be. 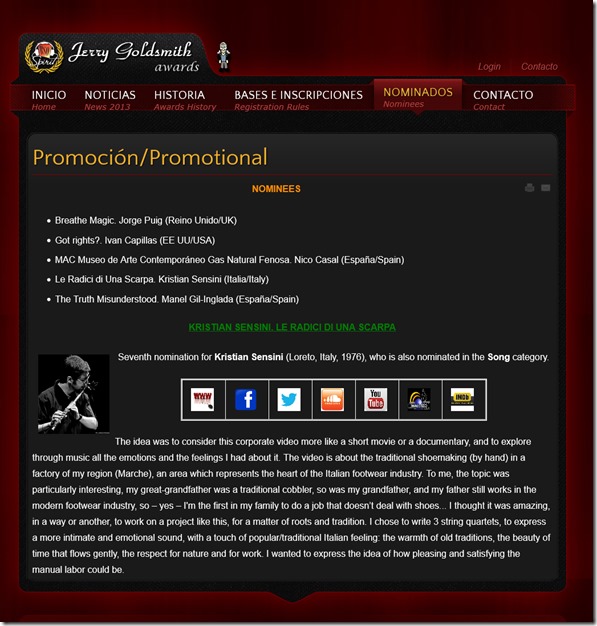