Italian composer Kristian Sensini has composed a delightfully varied and wistful score for Latvian director Signe Baumane’s uniquely-stylized animated feature, ROCKS IN MY POCKETS.  The film won the Fipresci prize at the prestigious Karlovy Vary festival and was described as a “modern milestone in animated storytelling” by Variety. The American distribution of the film was picked up by Zeitgeist who premiered the film in New York and Los Angeles in September, to be followed by a nationwide release.   Based on true events, the film tells the story of five women in Baumane’s family (one of whom is herself) their battles with severe depression and madness.  “Inspired by the animation styles of surrealist Jan Svankmajer and Bill Plympton,” wrote the label in their press packet, “Baumane’s film employs a unique, beautifully textured combination of papier-mache stop-motion and classic hand-drawn animation which required more than 30,000 drawings.”  To accompany the film, Sensini carefully selected instruments that would be complementary to Signe’s voice as she narrates the film in counterpoint to the beautiful, mixed media animated images, without serving as a distraction to the narration.  “Writing music for a cartoon which deals with such dramatic, real issues was a challenge for me,” Sensini wrote in a blog on his web site. “Not to mention the fact that these events belong to the personal story of the director, meaning the risk of ruining everything was always around the corner.”   Employing an acoustic ensemble of piano, flute, clarinet, cello, and double bass, supplemented by ethnic Latvian instruments, Sensini has created an intimate and variegated musical soundtrack for the film; each of the five women have a defining musical theme of their own, which show up in other treatments as Signe tells the story of their issues with mental illness (the first woman’s story, that of Anna, is the most oft-reprised motif); a number of stand-alone compositions support various other animated set pieces.  Melodies tend to be brief, with tunes relayed in a kind of folk-music orientation and much of it written in a spritely ¾ time; each track is as welcoming and charming as the cartoonlike drawing style of the animated illustrations.  The film also covers a short history of 20th Century Latvia, which Sensini has largely accompanied using those ethnic instruments.  While Signe’s story narrative conveys in comfortable resonance the very sobering story of the darker regions of despondency (the light-hearted opening track’s title, “How Not To Commit” [it leaves off the word “Suicide,” which is nonetheless implicit in the statement] is an example of the layers of depression that Signe’s describes; the film’s title itself echoes another form of self-destruction), Sensini focused on the clever and charming visual style of the animated drawings and creates music that is almost always optimistic, breezy, and delightful – not to negate the seriousness with which Signe addresses the story of mental illness in her family history, but to layer the film in a positive and comforting telling of the family’s journey through life despite the shadows of despair that shrouded these five ladies (the film’s subtitle, “A Crazy Quest for Sanity,” perhaps best exemplifies its tone).  In the final analysis, Sensini’s score is echoing the inner soul of each of the characters, whose soft-spoken grace and elegance is perhaps best described musically in the score that accompanies Signe’s verbal reading of the tribulations each of them have gone to, with his very moving “Finale” offering up a heartfelt musical resolution of dignity and humility; a tone that his “End Titles” relate in the happy waltz rendering of Anna’s Theme.

Sensini, who bears a special interest in the sci-fi-,fantasy, and horror genres, received a total number of nine nominations for Best Score (including Feature Film, Documentaries, Promotion, Best Song, Best Short) at the Jerry Goldsmith International Film Music Award; he also won the Global Music Award for his music for HYDE’S SECRET NIGHTMARE (see my review of this earlier score in my November 2012 column).
To sample the score, see: http://moviescoremedia.com/rocks-in-my-pockets-kristian-sensini/ 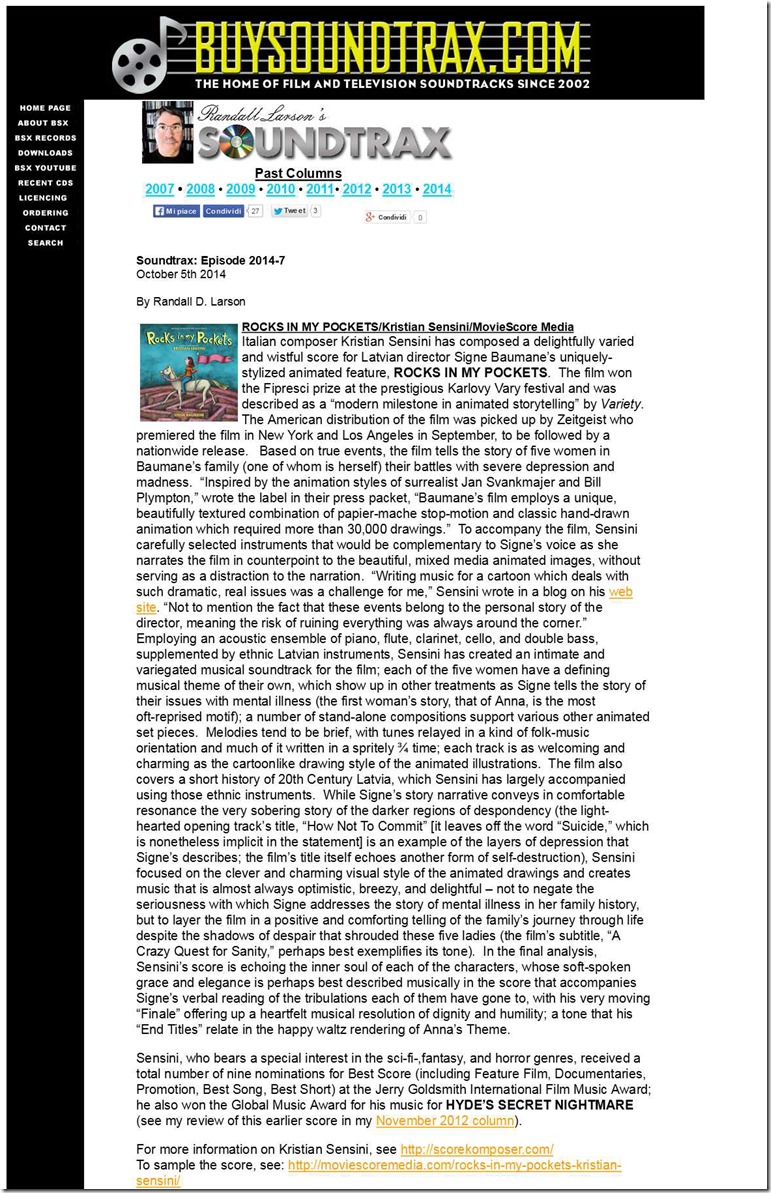