Signe Baumane wrote, directed and provided voices for this unique animated film that addresses the battles with depression that she and four other women in her family have fought. The movie, which has played at several festivals, includes a mini-history of Latvia as part of its narrative, and will be this year’s Latvian entry for AMPAS consideration in the Foreign Language category. Composer Kristian Sensini created distinct musical connections to each character in the film; these themes are provided as separate tracks in the album presentation of the score.

“How Not to Commit”
starts off with xylophone, low brass and a cabaret-like piano rhythm, before a collection of similar ideas take us through different dance styles and variations. The lovely “Anna’s Theme” follows, a gentle waltz with moments that suggest the darker corners of the character; it’s a beautiful idea that calls out for a fuller orchestral setting. A warm low-string motif begins the starker
“Divorce Latvian Style”
with a lyrical line (recurring in “Forest”) before kicking off a string version of the jaunty music that was set up earlier. “New Wife, New Life” delivers another welcome shift in sound, with the addition of accordion and woodblock, while a more obvious ethnic flavor occurs in “Russians, Germans, Partisans.” All in all, the playlist offers a diverse set of tracks.

Sensini is relatively new to featuring scoring, though he has around a dozen to his credit, plus some television projects. This score may gain some more attention for the composer. The interesting orchestrational choices lend the music a unique sound that falls closer to European animation than standard Hollywood fare. The result is an often delightful work provided ample space to breathe in this MovieScore Media release. —Steven A. Kennedy 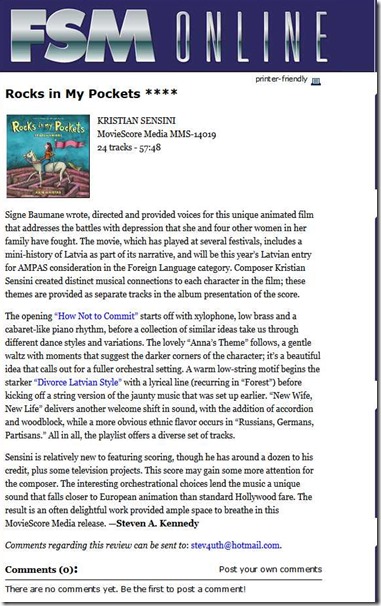