“A funny film about depression” is quite an unlikely tagline for an animated feature. But it also a nice reminder that this medium is largely harmed by common perception it can only explore themes appealing to children. There’s an entire world of adult animation out there that could even eclipse some greatest live action films in terms of sheer artistry and maturity. The Latvian production Rocks In My Pockets (directed by Signe Baumane) first won over the audiences of such festivals as Karlovy Vary and then was picked up by an American distributor for a theatrical release in North America.

For its seemingly dark and oppressive subject matter, the score Kristian Sensini remain quite light-hearted and good-spirited for the majority of its running time. It is written for a very small ensemble of piano, percussion, strings, clarinet, harmonica. While a lot of different colours are employed, the score never really goes beyond it’s chamber-like size – it’s a very European sounding film music and that often means restraint. Which can be, quite honestly, a nice break from big orchestras and armies of electronics.

For most of the soundtrack album, the pieces employ a dialogue between two or three sections of instruments: piano, glockenspiel and strings (‘Back Home’), clarinet and string quartet (‘Divorce Latvian Style’) or just solo piano (‘Anna’s Theme’). Only occasionally, the scope expands a little, as with ‘Russians, Germans, Partisans’ – where chorus supports the rhythmic Eastern ethnic colours. Solo female vocals also add a nice touch to ‘Helpless Creatures’.

Solo cello is always employed in the moments of despair and is associated with the character of Miranda (‘Miranda’s Theme’). Sensini creates a wonderful dialogue between this lovely instrument and clarinet later on (‘Miranda Solstice’).  On the other side thematic pond, there’s definitely a more playful side to ‘Linda’s Theme’. That piece marks a point when the score takes on slightly brighter colours – the light chorus of ‘I Hear Music’, ethereal ‘Finale’ bring it to a satisfying emotional close.

The hour-long album from MovieScore Media is a relaxing and undemanding listen. The emotional side is somewhat elusive for the majority of running time, which might detract some listeners expecting more rounded (and less sparse) musical  story arc. But then, it shouldn’t be a detriment. Kristian Sensini creates an interesting portrait for difficult subject and it’s worth investigating, especially within its interesting film. 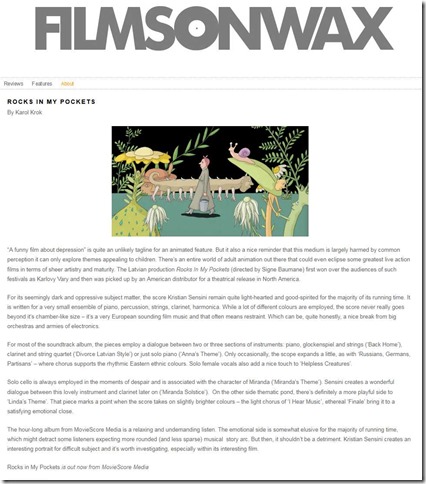