In Spring 2013, Award-winning film composer Kristian Sensini dove into a challenging project that was equal parts light and dark. A year later, “Rocks in My Pockets,” is now considered a critically-acclaimed animated feature and Latvia’s entry for “Best Foreign Language” at the upcoming 2015 Academy Awards.

Musically, the film’s soundtrack delivers the appropriate amount of melancholic and uplifting themes for Signe Baumane’s passion project. In short, the score left viewers enthralled for 88 minutes. The New York-based Latvian animator wrote and directed “Rocks in My Pockets,” which was released on Sept. 3, 2014 by Zeitgeist Films and can next be seen at the Palm Springs International Film Festival in January. The film is a personal story on how she and five women in her family handle their battles with madness.

In this interview, Sensini talks about his process, his inspirations and what he looks for in a project. More of his work can be heard in “The Becoming,” “7 Giorni della Fine del Mondo,” “Brightside,” “Hyde’s Secret Nightmare,” and many more.

How did you get involved with “Rocks in My Pockets”?
KS: By chance, as it often happens… I had got in contact with the director Bill Plympton so that he could listen to some of my works, and Signe – Plympton’s friend and collaborator – was looking for a composer for her first animated feature film. After exchanging a few e-mail messages, I prepared some mock-ups for two scenes of the movie, she liked them… and I immediately started working on it.

Was it difficult to find a tone for the music after viewing the film?
KS: It was a deep overwhelming emotional experience just watching it, so I had to find the right balance between the various tones of the film: it’s an animation movie for adults, very funny in some parts and very dark and down-to-the-earth in others. I didn’t want to see it just as an animation project, constantly taking into account that behind every single character there was a really rich and complicated life and, in some cases, a sad and horrible death. At the same time I had to lighten the weight of some scenes, but not too much, because Signe was really brave and not at all afraid of having some scenes scored in a really dramatic way.

What was the most difficult thing that you encountered as a composer on this project?
KS: This is a real story AND actually the story of Signe’s family, so at first I was worried about ruining everything. It’s the same feeling you have when you’re invited to a family dinner and you don’t know anyone, and you’re scared of saying and doing the wrong thing in the wrong moment. But this was a special family and Signe was so friendly that I immediately sympathized with her and I feel extremely proud that she wanted to share her story with me; I loved all the characters and, in the end, it was like… sitting at lunch with MY family, where you’re allowed to talk about everything and even to joke about pretty serious topics as mental illness, suicide and depression.
On a more “practical” level, the most difficult thing was trying to create a musical presence that was a sort of companion to the voiceover. The whole movie is narrated by Signe’s voice that acts as a counterpoint to the beautiful drawings. This detail was an essential part in the composition and orchestration process, as we together chose and carefully selected the instruments that could better create a musical background to the voice without distracting the viewer from the narration itself.

What was your favorite scene to score?
KS: Probably the cue about Irbe (if you’ve watched the movie it’s a very delicate and touching moment in the movie): she was a young and promising musician, and I guess I feel somewhat connected to her character. “Irbe’s theme” is in fact a beautiful and melancholic piece.

Did you find yourself using one instrument more than others when creating this score?
KS: Yes, the cello plays an important role in this movie, actually. I’ve used it a lot, mainly as a melodic instrument but also in harmonies and rhythm patterns. I just love the warm sound of the cello and I thought (the director as well) that it was the perfect sound to use in this movie: it doesn’t fight with the frequencies of the voiceover and can be really dramatic in a scene and really quirky in the very next one. It’s the “Jack of all trades” instrument of this soundtrack!

The film is getting a lot of potential Oscar buzz, are you surprised at this?
KS: Well… Let’s say that I was surprised to read the title of a movie I’ve worked on in the same sentence of the words “Academy Awards”, it certainly is something that doesn’t happen every day! Other than that, I’m not that surprised because Rocks in my Pockets is a great movie, extremely honest and well crafted, not to mention that it is pure storytelling and adventure, exactly what a movie should be. I hope that the Members of the Academy will recognize this big little work of art, it’s something different from the usual animation movies.

What was your working relationship like with the director, Signe Baumane, since you are not located in the same country?
KS: Everything was perfect. As we kept in contact using the email and Skype, we had to consider the different time-zones, and this allowed me to work in my studio and send the daily cues to New York by mail at the end of the day and go to sleep; the morning after I would receive Signe’s feedback, be able to make adjustments and send them back. It was really smooth! When I was sleeping Signe was working and vice versa, but there were times when both of us were working! It’s a really clever solution, and that’s one of the reasons why I like so much to work on overseas projects.

Did you give each character special themes? If so, which was your favorite character to score for?
KS: Yes, every character has his or her specific theme, it was a chance I didn’t wanted to miss. Nowadays, soundtracks are so buried and hidden in the mix that music has become a sort of sonic wallpaper, really inconsistent. What you hear is “pads” and soundscapes, you can’t catch a single melody when you are out of the theatre. I love the soundtracks that can live a life out of the movies (as Morricone taught me). My favorite theme is “Anna’s Theme”, because she is a great character, really complex. At first I had some trouble finding the right theme for her, I needed something that was joyful, uplifting and dramatic at the same time… a real challenge. In the end it worked so well that I’ve used it extensively all over the movie, in little cues with different arrangements (for solo piano, for two instruments and so on). At the very end of the movie you can listen to the full track with orchestral arrangements. Some critics wrote that this piece reminds a little of the works Nino Rota composed for Fellini, and I’m very proud of this… of course.

You have sc
ored a lot of horror films in the past and the genre for this film is very different. Where did you get the inspiration for the tone for this film?
KS: When I score a movie my focus is on the characters and the story, so I really don’t worry about the genre of the movie. If there’s a great story to tell and it is written well then it’s something that I’m interested in working on. That being said, the inspiration comes directly from the beautiful images Signe drew and from her way to tell the story. The voice-over you hear in the movie was recorded by Signe herself, so it was easy to connect to such a personal and deep story, as the anecdotes narrated are the stories of Signe’s family and her personal fight against depression.

Which composer would you say has the most influence on your music?
KS: John Williams. He is the main reason I got interested in film music. Then, Bernard Herrmann and Nino Rota, to follow.

Is there a genre that you would love to work in film scoring, which would it be?
KS: Anything which has a good script and is a work of art. We are in this world to learn lessons and feel emotions, so I’d choose everything with a good and clever storytelling. Also, I hope to find more animation movies to work on in the future, the people involved in this genre are the best, they’re great and imaginative artists who work for years on a single project and really care about it.

What is your favorite film that you’ve scored so far in your career?
KS: “Rocks in my Pockets”, no doubt about it.

If a project came along that you would get really excited about, what would it be?
KS: As member of the audience I’m really excited about the upcoming “Peanuts” movie (even more than Star Wars VII and I’m a HUGE SW nerd). Talking about my contribution as composer to a potential project, I would be excited to work on a good biopic (the story of Nikola Tesla could be a great one) like “The Imitation Game” or any sort of historical movie.

Are you currently working on any projects?
KS: I’m working on a couple of interesting projects and pitching some others but I really can’t tell you which ones, I’m really superstitious and each time I’ve talked about an upcoming project in an interview, well… it didn’t end well! I’ve had my amount of rejected scores as each and every film composer on Earth (except for John Williams, clearly).

Very special thanks to Kristian for being so gracious with his time for doing this interview together and let’s do it again after you win and Oscar! Also very special thanks go to Jordan Von Netzer for the major assist on this one. I definitely owe you one!

The soundtrack to “Rocks In My Pockets” is available from MovieScore Media on iTunes https://itunes.apple.com/us/album/rocks-in-my-pockets-original/id923017808

“Composer for film specializing in Thriller, Drama, Fantasy and Documentary. He is a Piano and Flute player with Classical and Jazz Background studies, with credits for Movies in Italy and USA. His music is present in the best Music Library worldwide specialized in movie music (credits Rai and Mediaset, the biggest Television Network in Italy). From 2010 Sensini received a total of 9 Nominees for Best Score (categories Feature Film, Documentaries, Promotion, Best Song, Best Short) at the Jerry Goldsmith International Film Music Award. 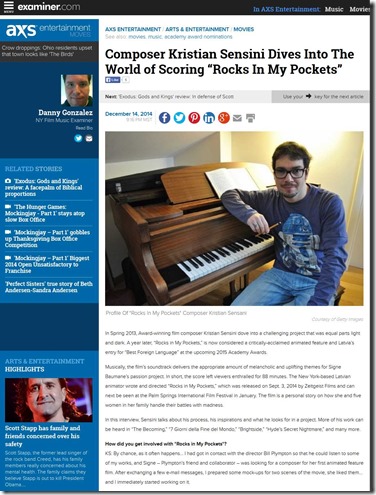