“La sorpresa” is a 2015 Italian film directed by Ivan Polidoro. It’s the story of three people and their relationship, unwanted, but necessary. The protagonists are a father, his daughter, and a male nurse. The setting is a city in the south of Italy: Potenza. She immediately realizes she’s not able to take care of his father because of an unnatural awkwardness. Too many years have passed and too many lies have been told. Rocco is a nurse, a lonely, mysterious man who lives for his job. He looks after Antonio with obsessive manners and tender affection – almost as a son would do – proving that a stranger can succeed in doing the things a family cannot do. Kristian Sensini wrote the score.

European dramas have a certain kind of mood and this is almost always reflected in the music. “Attese”, the opening theme from “La sorpresa” does a great job in getting me familiar with the story. The cue is quiet and dominated by a string motif that moves slowly as if to give it time to really sink in and give me time as a listener to feel the weight of the setting and not rush into the story. Now that I am in the right mood to really feel this score the composer continues with the almost atmospheric “La sorpresa 1” which as far as reflective themes go really hits the spot for me. I immediately connect with it and its ambient vibe and I hope we’ll get more pieces like this one. There’s a bit of late 80s, early 90s vibe in it and there’s no sweeter place for me to be in.

I always love to hear a cue like ”Devotio” in a score. This one almost has nothing to do with any story other than the one the composer wants to tell. It’s a beautiful and tender string theme that makes me feel as if I’m in a chamber watching a very intimate concert. The soloists put all their hearts in playing the notes that Kristian Sensini wrote and the effect is charming. The score evolves naturally so that an almost religious choral piece like “Ana Yelena 1” doesn’t surprise me and feels like it comes at the right time. Each of the two main themes “La sorpresa” and “Ana Yelena” get further explored in a few more subtle variations.

I love the modern ambient sound of the “La sorpresa” moments just as much as the deep string work the rest of the score brings. Overall the score really is a very nice surprise and I can’t wait to hear more from this composer. 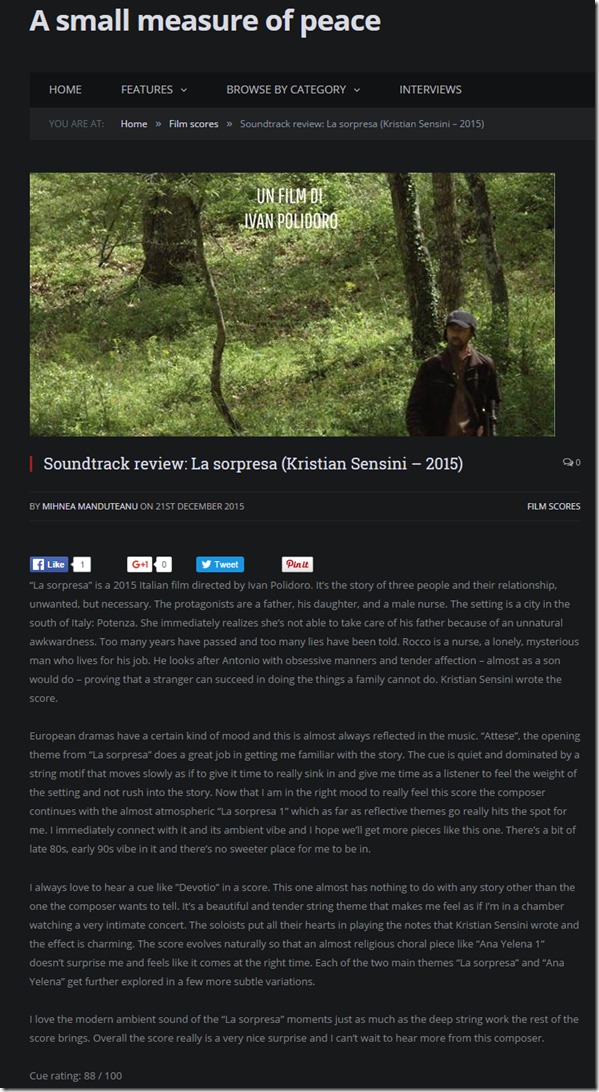