La Sorpresa, directed by Ivan Polidoro, follows a daughter whose increasingly ill father requires more attention than she can provide. Enter Rocco, a male nurse who begins to care for him as the daughter looks for answers as to why her relationship with her father has disintegrated over the years. The score is by Kristian Sensini, who garnered some attention for the recent Rocks in My Pocket.

Sensini’s intimate opening cue, “Attese,” begins with a string quartet setting of a series of harmonic pulses, and a low flute for contrast. The writing here has an almost chorale-like quality as it begins to reveal a thematic thread. In the first title track, the music takes on a more melancholy tone, with muted keyboard and electric violin. The material can be quite touching, partly due to the small chamber style, as in the beautiful “Devotio.”

A jazzier feel comes into play in tracks like “Figlia del Padre,” which features a pained motif against a stark backdrop. The haunting vocal in

“Ana Yelena”
has an almost medieval quality, a flavor continued via the string ensemble in “Ragnetela.” The hypnotic “Surprise Me” provides a slightly more contemporary vibe, similar to trance music. “Un Tango” is a nice change of pace with more of an emphasis on rhythm, before the disc closes with a piano version of the title theme.

La Sorpresa is a

haunting little score
with ideas that unfold slowly in a mesmerizing, quasi-minimalist fashion. There’s a bit too much repetition of material across the album’s brief playing time, but the tracks are well sequenced. —Steven A. Kennedy 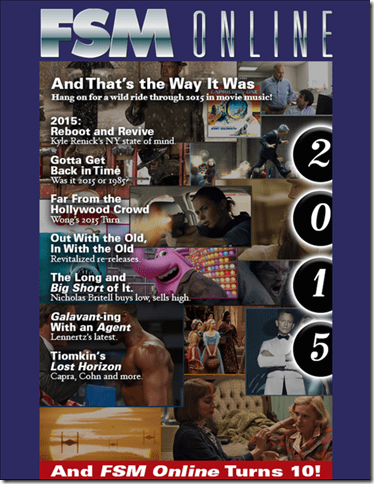 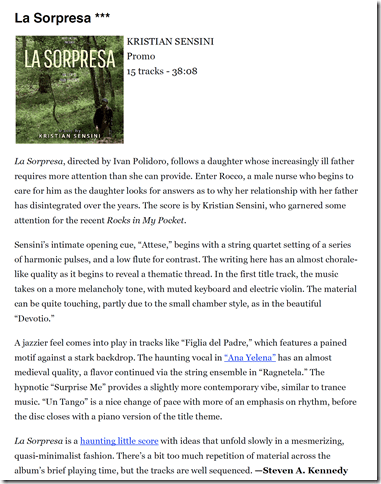