In the animated film, Rocks in My Pockets, Latvian artist Signe Baumane

The musical score of Rocks in My Pockets was created by Italian composer, musician and music producer Kristian Sensini.  Studying classical flute and piano as a child, he began experimenting with electronic and computer generated music by the age of twelve.  He began venturing into film scoring in the early 2000s.  Working in several diverse film genres, including drama, animation, comedy, fantasy, thriller, documentary and more, Sensini has composed musical scores for nine feature films, including Hyde’s Secret Nightmare, The Museum of Wonders, The Becoming

The music of Rocks in My Pockets begins with a rather humorous undertone.  Orchestral in nature with pianos and guitars adding flavor to the score.  The opening track, How Not to Commit, has a calliope-like sound with shots of tuba

inserted to offer up that comedic flavor.  Without knowing what the film is about, the listener thinks that perhaps the score is created for a comedy, until they listen further.  Coming upon the track Back Home, which offers a much slower version of the theme in the first track on the album, one wonders if something has occurred to cause the main character to pause and reflect.  An exotic flare, complete with chanting military voices, accompanies the military march sound in Russians, Germans, Partisans.

From that moment, there is a noticeable turn to the music.  It becomes less elaborate and more melancholy in Jealousy

and, though there is a bit of a pick up in the clarinet-led sound of Forest, the score never quite reaches that happy-go-lucky style of the first track on the album, becoming especially melancholy during Miranda’s Theme

The score perfectly reflects the artist’s walk through depression, particularly the ups and downs of manic depression during which the individual experiences great highs and lows.  The upbeat moments are weighted down by the more morose parts of the soundtrack, yet the entire album is quite an enjoyable listen.  If you had no idea what the movie was about, one would still understand the story the music is trying to tell, making the Rocks in My Pockets Soundtrack

perfect as the score of a film and as a stand alone album and well worth the listen. 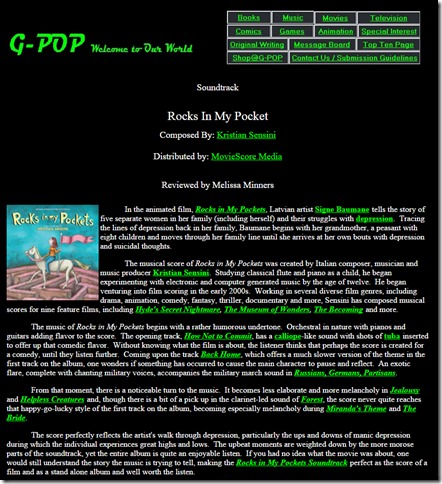