You can buy limited edition signed copies of the soundtrack at http://www.cdbaby.com/cd/kristiansensini3

Having quirkily played mental illness with his score for the generational madness of the fest favorite “Rocks in My Pockets” (its soundtrack on Movie Score Media) Italian composer Kristian Sensini creates another memorably individualistic soundtrack for “La Sorpresa” (“The Sunrise”). Here, the musical anguish is subtly inward and far less humorous, if no less enticing, as a daughter finds her father’s male nurse has far more of an emotional connection to the ailing man than she does. Sensini thematically plumbs her pained struggle towards a relationship in an impressively subdued variety of styles. Poignant chamber music mixes with alternative acoustical rhythm, child-like percussion hints of the past, while religious female voices sing a haunting chant. Even mod synthesizers and a tango come into this fraught, family bond. There’s an inventive, often meditative beauty throughout “La Sorpresa” that makes it a transfixing listen and Sensini an individualist talent to watch for, his classical training and studies with Ennio Morricone and Nicola Piovani evident in one of the rare, interestingly melodic scores that can tenderly capture inner emotion. Having cd signed and hand-numbered by Sensini adds a further nice touch for his unique, enticing score that bridges the classical and alt. family ties of film music. 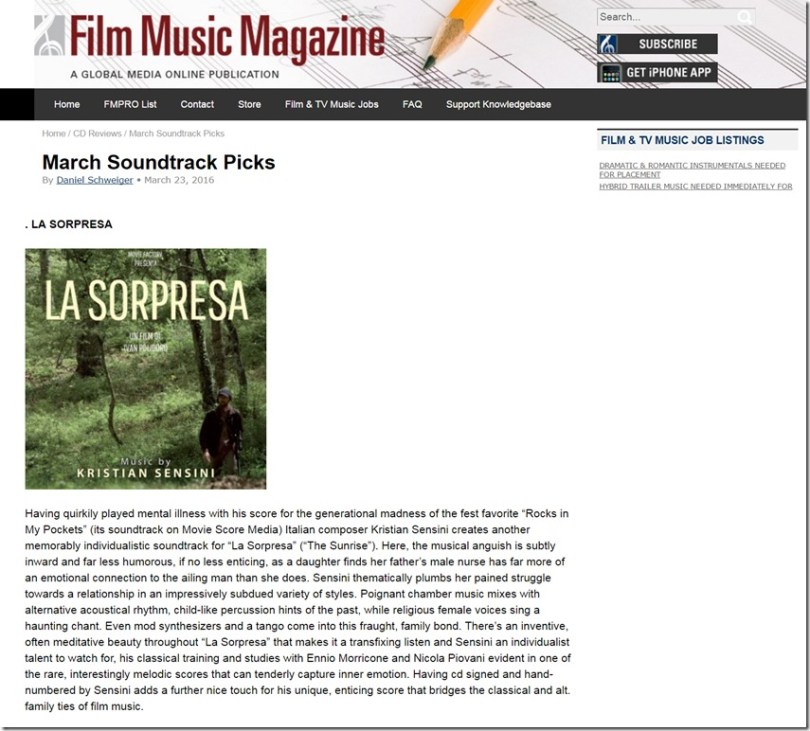