LA SORPRESA/Kristian Sensini/KeyeStudios – ltd ed cd + digital
Italian composer Kristian Sensini has released his latest score on his own, digitally. Be thankful. Directed by Ivan Polidoro, LA SORPRESA (The Surprise) is a family drama that focuses on the awkward relationship between a father and his estranged daughter, compounded when he suddenly grows ill and she must take care of him; in the process she grows more distant when a male nurse is brought in who provides the kind of loving care she cannot. Sensini (HYDE’S SECRET NIGHTMARE – see my review in my Nov. 2012 column; ROCKS IN MY POCKETS – see my review from the Oct. 2014 column) has provided an intimate score performed by a small string ensemble (violin, viola, cello), supplemented by guitar, flute, keyboard, and voice. The score begins with “Attese” (Expectations), a deeply morose intonation of cello chords that resonates with the sad disaffection between the woman and her father. Sensini’s title theme, with its highly reverberated keyboard underpinning, carries a poignant weight that is less harsh; its melody will drift throughout later cues to paint the family in colors of sympathy and sorrow (In “La Sorpresa 1,” the melody is taken by a synth-violin, while in “La Sorpresa 2,” Sensini gives the melody line to a toy piano, which, in referring to happier and younger days of the family, is quite touching). The awkwardness between father and daughter is adroitly summed up in the colorless measures of “Figlia del Padre,” while the close-miked cello melody evoked in “Padre” paints the father in a much more empathetic light. The voice of Laura Bruno is heard in several cues, including a recurring, hymnlike a capella motif titled “Ana Yelena” whose lyric repeats the titular name in beautiful, double-tracked harmony. The film’s turning point and score’s apotheosis is found in “Ragnatela,” an uplifting harmonic treatment for all three strings over an interplay of muted drums and electric guitar which offers a serene resolution to the distance inflicted upon father and daughter. A drum kit is added for “Un Tango,” adding a nice contemporary pop rhythm to the tango’s string melody and harmony; the drums are also present for the second reprise of “La Sorpresa,” where the melody is presented in a more positive tempo and much brighter harmony, the family’s journey from alienation is finding its reunion and redemption. “Surprise Me” is a pretty pop-styled melody played on keyboards with digital handclaps and drum-kit. LA SORPRESA is a thoroughly engaging and beautiful score, deeply honest and moving in its sensitivity and treatment of its subject matter.
The digital album is available on Italian iTunes and Amazon and elsewhere in the US.  A signed CD edition is available in limited quantities (100/c) from CDBaby. 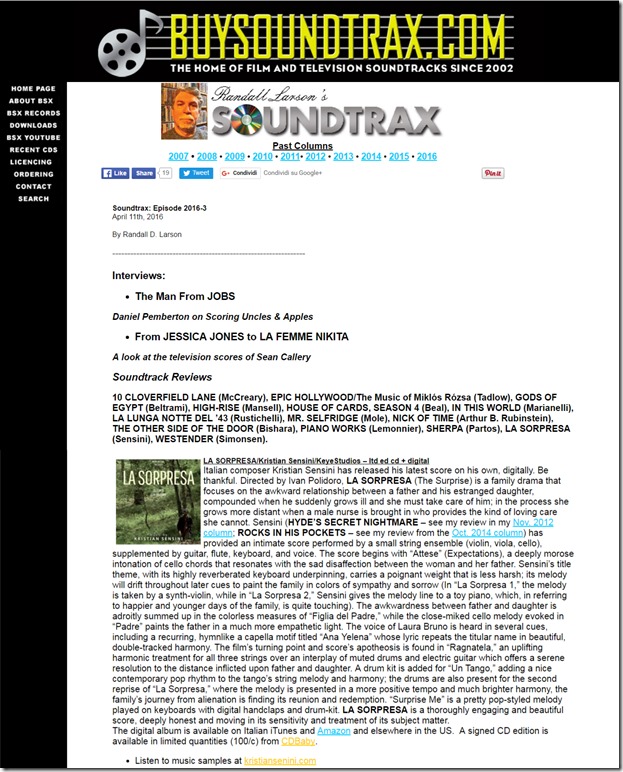