Karma follows a group of young boys whose past behavior catches up with them as they are tested and punished by an embodiment of evil. The film’s horrific score comes
courtesy of Kristian Sensini (Rocks in My Pocket, La Sorpresa). Karma’s opening title track features an enticing arpeggiated idea and a long, lyrical line with a gothic feel. “Staircase” pushes forward with an intriguing melody that again references the arpeggiating figure before becoming more disjointed as it slowly moves upward over a menacing undertow. By contrast, the “Woods Theme” features a soaring
high string idea over rich low strings and a breathy vocalise.
The score overall does a fine job of establishing subtle textures that become creepier as various motivic components float through them, evidenced in tracks like “Tensive
Dialogue” and “Dirty Secrets.” Similarly, many cues feature low pedals and slow builds that add tension, which occasionally releases, as in “The Attic.” The arpeggiated idea
also recurs throughout the album as connective tissue.
“The Cellar” moves us most firmly into horror territory, with close intervals and sudden hits set against a high string drone. After a passage for a music-box melody and crescendoing vocals, the cue moves into a quasi- rock-based section reminiscent of a Richard Band score.
“Abductions” offers more macabre sounds intermingled with low strings, including a cello line that lends an emotional pull to the proceedings. The “Trailer” music wraps up the playlist nicely, providing one last burst of intense horror music. 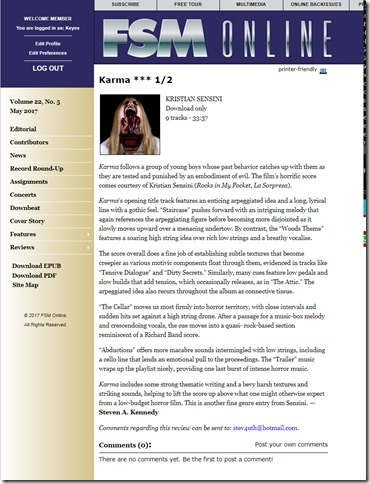