KARMA/Kristian Sensini/Records DK – digital
KARMA is an independent Italian supernatural horror film made in 2017. It received a limited release in Italy, but it was shortened to a 24-minute version which has been posted to Facebook. It’s a pretty provocative movie, and very nicely scored by Kristian Sensini (HYDE’S SECRET NIGHTMARE, ROCKS IN MY POCKETS), whose music has been released as a digital soundtrack. The plot has to do with six teenage boys who, over the course of a weekend, will soon have to face off against their karma, as an evil entity seeks to punish them for their mistakes. “The music I wrote for the movie has a sort of ‘woodish’ quality,” Sensini told Soundtrax. “I’ve extensively used strings (particularly the low textures of cellos and basses) and woodwinds because they remind me of the warm and dark nature of the wood that has a special part in this movie. I’ve tried to avoid the classical horror soundtrack clichés and give each cue in the movie its unique “breath,” in the true sense of the word: if you listen carefully, you can actually feel a mysterious and ominous breath (done with instruments). It’s as if the soundtrack itself is the Evil, a character that is watching the young boys and waiting in the Darkness, ready to hit.”
The digital soundtrack is available from amazon, iTunes, and can be heard on Spotify.
For more information on the composer, see www.kristiansensini.com. 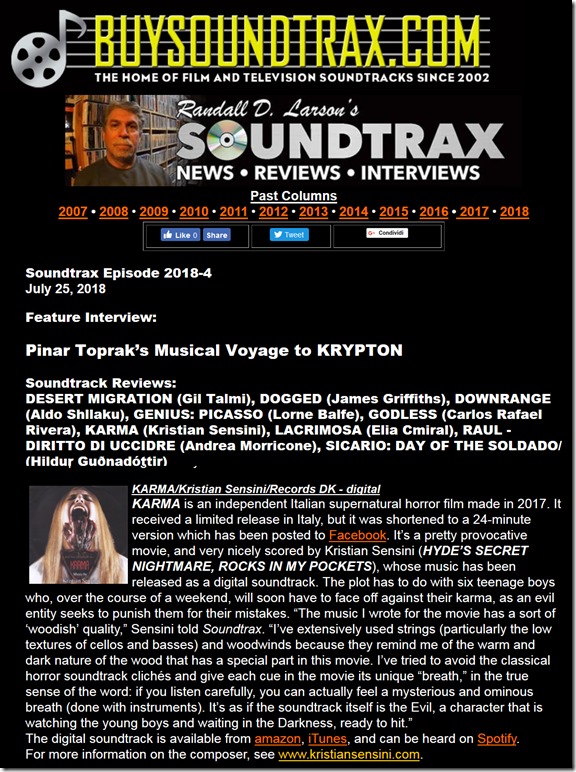