I’m old enough to have bought vinyls records as a child, or rather to have asked my dad to buy them for me. I used to get 45 rpm of cartoons as a gift, which I still jealously guard. When I was 12 years old, Rai broadcast the serial TV Movie “The Secret of Sahara”, I don’t remember having seen a single episode, but I remember very well the emotion of listening to the music of the trailer or promo. I asked my dad to take me to a record shop to buy that Soundtrack, this was my first conscious purchase of a 33-rpm record. It was an Ennio Morricone record. My dad always made me see very beautiful movies, especially Italian, with the complicity of the enlightened programs of RAI television and with the little paw of the Betamax recorder that allowed me to keep the movie and watch them again and again.
The Soundtracks of many of those films have been signed by the Maestro, more than 500 in his long career.
Years later, consciously or not, I started composing Music, initially for myself then for Cinema and Television. The Maestro has always been a point of reference, for the limitless musical ideas, for the innovative sound, for those melodies that tear your soul out and seem never to end.
On December 4 2010 in Pesaro I had the luck to see him conducting a big orchestra, I only remember the first part of the concert, from the second half onwards I had a high fever, emotion and dizziness caused by the beauty of the Music? I’d like to tell it like that but it was the beginning of a banal flu.
A year later I met Ennio Morricone, thanks to the invitation of his friend Massimo Cardinaletti, on the occasion of the awarding of the “Gentile da Fabriano” prize to the Maestro. On that occasion I had the opportunity to have a chat with him, always cordial (and severe where necessary…) with the young composers. I gave him some of my works and asked him to autograph that vinyl record I had bought more than twenty years before. 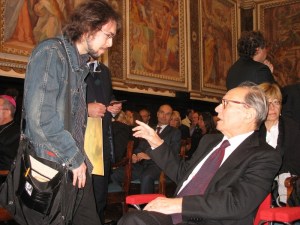 Another year passed, I enrolled in the Music for Film workshop at National School of Cinema in Rome, an experience that transformed my professional life thanks to the many Masters whose lessons I was able to attend.
The artistic director of that workshop was the Maestro himself, I had the absolute privilege of being able to listen to his lectures and briefly to speak with him again “de visu” (face-to-face), after giving him a new work of mine he said to me “I’ll be honest, I don’t know if I’ll have time to listen to it, but I keep it with me in my bag”.
Then he asked me the rite question, “Did you study at the Conservatory?” “Yes Maestro, I graduated in Jazz in Pesaro. ” He looked at me with a clever smile, a mixture of paternal disapproval and complicity. “Then you will always write soundtracks like a jazz musician…all right”. In that observation I found a lot of Morricone’s musical philosophy, a composer who comes from the school of Petrassi, but also an improviser open to all the Music of the ‘900. Here if there is a composer who has succeeded with creativity and intelligence to condense the many experiences of the Music of ‘900 that is Ennio Morricone.

From him, from the lessons, from the countless listening to records and film visions, from reading books, essays, interviews, I learned many things.
• The importance of originality “When something is fashionable… it means it is already old”.
• The importance of living composition as an art and craft, he has always written music with pencil and music paper (like John Williams, even more so because in his studio Williams has a piano, Morricone neither).
• The need to give back the right dignity to the Composer’s work, that’s why he accepted to become the Honorary President of the ACMF association that fights for the rights of the composers of Applied Music.
• Although he has written hundreds of soundtracks, Morricone has rejected or abandoned many projects, where he realized that he was not guaranteed the necessary freedom to express his ideas in Music. An enormous lesson of dignity and integrity and respect towards Music.
• I also learned from him that Film Music must be at the service of film, but also be able to stand on its own two legs, it must be able to have “its own life” outside of film. Many modern soundtracks go in the opposite direction, composers seem to do everything they can to avoid taking risks and to make music marginal and easily forgotten. Morricone has always tried (and has definitely succeeded) to write important and dignified Music, with innovative and experimental features, even for those films that were not of high quality.
• I have learned not to be afraid of dissonances, to make pleasant and familiar even the musical passages that might seem more difficult at first listening.
• I’ve learned the ability to work with a few instruments and make them sound…many! A lot of his Soundtracks have been recorded with small budgets, his genius was to find harmonic, rhythmic and orchestration solutions that would overcome these limits. The “limit” as a stimulus to creativity, the courage to take risks, even at the beginning of his career, when for fear everyone, or almost everyone, is willing to accept the thousand compromises that the work demands.
“In love as in art, constancy is everything. I don’t know if there is love at first sight or supernatural intuition. I know there’s constancy, consistency, seriousness, duration.”
I started to make the right quality professional choices, and to write Music that I can listen to again without regrets, since I follow his teachings.

Yesterday I received this from Roger Waters, he’s a member of www.ACMF.it the same association Maestro Morricone was the Honorary President of.

“Maestro Morricone’s melody will haunt me the rest of my days.

The spotlight fades the boys disband

The final notes lie mute upon the sand

And in the silence of the grave

I can still hear those lost boys calling